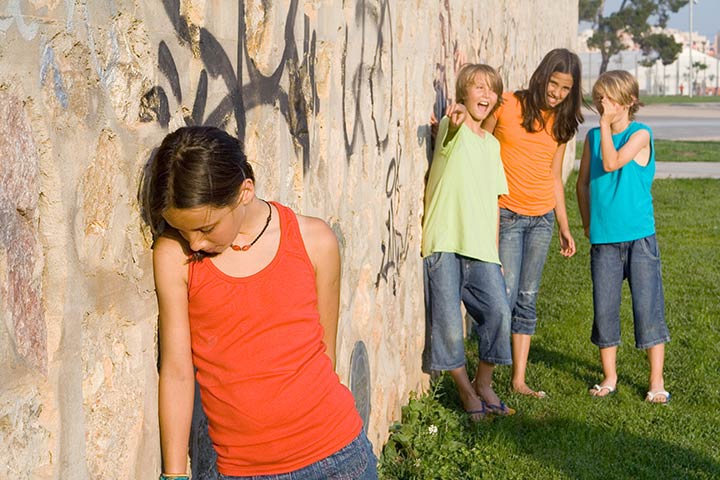 The school is where kids have the best time of their lives. Sadly, for some, it may not be so. We all are aware how every school has a group of snooty girls for whom the school is a playground for cheap tricks and bullying others. These mean girls indulge in a lot of gossips and enjoy mocking others. They feel good about themselves when they publicly ridicule people. The mean girls usually have a group of their own and look down upon everyone outside the group. They feel that they are superior to the other students in the school and have every right to humiliate anyone who is not up to their standards.

Why Are Mean Girls So Mean?

Teasing is common amongst friends, but when it leads to mockery, it is known as bullying. Some girls take teasing to such a level that the other person feels humiliated and harassed. But what kind of sadistic pleasure do these mean girls derive by being so condescending? What prompts them to do this?

According to researchers, teenage mean girls in high school often seek acceptance and control in every aspect of their life. If they lack it in one, then they try to fulfill it in some other area. For example, Miss A has no say in her house. She is often neglected by her family who does not pay attention to what she has to say. So she forms her group of girls who adore her, accept her, and look up to her. She then seeks control of the group so that she has the power to control things the way she wants them to be. Once she gains the authoritative position, she will not like anyone to change the dynamics of the group. She will do everything to maintain her position. This need for power and acceptance prompts aggressive behavior towards meek victims.

Who Is A Mean Girl?

Mean girls are selfish and insensitive in several ways. Take a look at the types of mean girls you will find in every school.

These girls thrive on dirty details of others’ life. They have multiple sources to keep themselves updated with the latest gossip and ensure that every negative or embarrassing detail is never left unshared. They enjoy spreading rumors. In case a rumor does not seem juicy then they do not refrain from adding some spice to it to make it more interesting. They can never be trusted with secrets as they cannot keep one. Not even that of their friends. In fact, these girls don’t even spare their friends. They will betray them for the sake of spreading a rumor.

These girls never seem to be impressed by anything. They overly scrutinize things to find faults in others. They belittle everything about the other person to feel a sense of false pride. Unnecessarily criticizing others makes them feel good. They pass snide remarks on others dressing style, appearance, gait, mannerisms, and social standing. Their sarcastic comments break their victim’s self-esteem and frighten them.

These are rich girls who prefer interacting only with those who match their social status. They can afford fancy stuff and want to be surrounded by friends who can maintain the same. For them, mixing with rich people is a way of expanding right connections that can yield future benefits. Anyone below their standard is looked down upon and treated badly. These girls also pick on girls who may not necessarily be below their level but are perceived as a threat to their social status.

These girls like to dictate terms to others. They decide on who can talk to whom and who should be an outcast. They are like referees in a soccer match where showing the red card to a player has him out of the game. Any girl they show a red card to is excluded from all parties, groups, and events. Girls are nice to these mean girls out of fear of being labeled as an outcast by them. Similarly, members of the group of these mean girls comply and approve every action of theirs so as not to be banished from the group.

These girls attack behind the veil of social media. They post online pictures and create demeaning posts about girls they dislike. At times, they even write blind items mentioning everything about a girl without actually naming her directly. However, their hints are always too obvious to guess. They even go to the extent of creating fake profiles only to humiliate someone.

Signs Of A Mean Girl:

There are several reasons why mean girls are the way they are. Some of them don’t even realize they are mean and hurting others. Have a look at the signs of a mean girl:

Mean girls are often insecure about something, such as looks, clothes, or performance in school. They feel jealous of other girls who have something that they lack in, prompting the bully behavior. They find it tough to see anything good happen to people they are envious of and do everything to kill the happiness in others’ life.

For mean girls, looking good at all times matters a lot. They put in a lot of efforts to look presentable at any time. This obsession is transferred to the way they look at other people. Girls with acne or braces or even overweight become the butt of jokes. They make fun of anyone who is not up to the mark in terms of appearance.

Mean girls want to date the best of boys, and excellent flirting skills are a prerequisite for any mean girl. They very well know how to play the game, when to smile, how much to smile and how to get a guy’s attention. They are excellent at manipulating.

They live by the saying that ‘you are judged by the company you keep’. Mean girls are very particular about the people they hang out with. Since they wish to sustain their position at the top of the ladder they befriend girls and boys who are popular and rich.

Long-term friendship is not a thing for most mean girls. Means girls often indulge in a lot of backbiting and do not spare their ‘so-called’ friends. Their friendship is often temporary and for convenience sake. Once their purpose is fulfilled they do not bother to look back again.

How To Deal With Mean Girls?

Tackling children’s problems is a complicated affair because you want to help them but do not want to seem controlling or interfering. You seek your daughter’s well-being and want to help her, but it is for her best that you let her tackle the situation by herself. You can surely guide her but do not directly interfere. Here are a few ways you can help your girl in dealing with mean girls in school.

1. Talk With Your Daughter:

If you notice any behavioral changes in your daughter, it is important that you talk to her and find out if she has been facing any trouble at school. Listen to her. If she is convinced that she has someone to help her, then she will come out of the shell. You can teach her ways to tackle gossip and deal with alienation. You need not try to intervene because this is all a part of growing up and she needs to deal with such situations by herself. All you need to do is let her know that you are with her.

If you have experienced or witnessed dealing with mean girl behavior in school, you can share those incidences with your daughter to let her know that she is not the only one to face such a situation. You can tell her how you struggled through those lonely days but in the end managed to survive with sheer determination and courage. Make her understand that some people’s behavior and opinion makes no difference to her life and that she should be strong and focused on her aim and ambition.

It is important that your daughter remains focused on achieving her aims. Having a bad time at school can affect her mentally, but she has to divert her attention and focus on what is most important for her in life. You can ask her to spend less time on social media and be more interested in studying or even playing sports. You can also occasionally monitor your daughter’s social media accounts to ensure that there are no instances of cyber bullying.

4. Teach The Importance Of Friendship:

Accompanying your daughter to school to support her may not be an option for you, but you can encourage her to make new friends. Friends can be the best support system for your daughter. New friends will help get her mind off the mean girls at school. Friends can help lift her mood whenever she feels sad or lonely. Your daughter can study, play and participate in various other activities when she has the company of new friends.

Nothing irks a bully more than the lack of reaction or response. You can teach your daughter how to stay calm and react less to mean girls who are determined to trouble her. She should know that she does not need to seek acceptance or approval of certain people. Mean girls mostly target people they feel threatened by and are nasty with them only to pull them down. They often feel that people look up to their opinion and that they are some trendsetters. Paying no heed to such people’s words will strip them of the power they feel they have over others.

Not everyone has the courage to fight against mean girls but continuing to witness mean girl behavior towards another girl in silence means that you have no problem with it, which is wrong. Your daughter has to know that she should not be a spectator to mean behavior. It’s best to walk away from such situations if you cannot object to it. With no audience to entertain, they might lose interest in bullying.

At times, there are chances that things get out of hand. In such situations, it is good to bring matters to the notice of an adult who can handle the situation. Your daughter can inform a teacher about the unfair treatment of mean girls and ask the teacher to help. The teacher may not reveal the identity of your daughter yet manage to settle the situation in the best possible manner.

Being a part of the parent-teacher association (PTA) gives you access to insider information about the developments in the school. Also, you get acquainted with teachers and other parents. If your daughter is being troubled by some girls, then you can raise awareness regarding such problems in the PTA meetings and find means to curb instances of bullying. This way you can also help several other girls who are victims of mean girls.

Being a teenage girl is not easy. It is a tender age where girls develop a lot of insecurities about themselves, and any harassment can leave a lifelong scar on their minds. It’s important that parents are aware of what their daughters have been doing in school and outside. Every parent must keep a check on their daughter’s behavior, and any change must be recognized before things go out of hand.