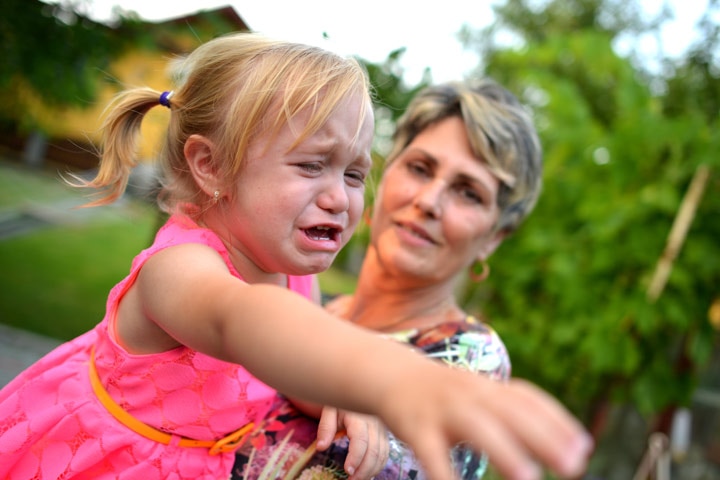 Is your child misbehaving these days? Do not become alarmed. Every child goes through the phase of disobedience and it is your responsibility to take control and behave wisely. The way you handle your child can have a huge difference in his or her behavior.

Handling child temper tantrums can be emotionally and physically draining for you, but don’t worry, it’s not just your kid. Below are some techniques to handle flaring temper among kids and help you establish a great mother-child relationship.

What Is A Temper Tantrum In Kids?

From whining and crying to screaming, hitting and kicking, temper tantrums in kids may vary in terms of severity, and this is most commonly noted in boys and girls between the ages 1 to 4 years.

Unlike adults, kids do not have the sense of control, so they feel frustrated at the lack of their ability to get their way. Remember the time when you felt at loss of control in a particular situation, and felt terrible? Well, that’s exactly how your child may be feeling, except that he doesn’t realize he’s supposed to control the way he behaves.

Why Do Children Have Tantrums?

It is believed that a kid may throw tantrums for different reasons: when he’s hungry, seeking attention, seeking assurance or just feeling uncomfortable. Often, children throw temper tantrums when you don’t give in to their demands; it can be anything, a particular toy or some unreasonable demand!

How To Deal With Child Tantrums?

If your child is throwing temper tantrums more often than acceptable, it’s time to intervene and take some necessary steps to ensure that your child is well behaved and in control of his emotions. Here are some ways and how to stop your child from throwing tantrums.

This is one of the best ways to stop temper tantrums in your kids. Though it may be tough, but it’s the most basic rule you’ve got to master when it comes to handling your kid’s temper tantrums. You do not have to say ‘yes’ for everything, but try to avoid negative words that may make your kid feel as if he is being defeated and rendered powerless.

Understand that the conversation you have with your kid during a temper tantrum doesn’t have to be a power struggle. You need to be a little less authoritative and gentle when dealing with your kid at this stage. Instead of saying “No, I don’t want you to do this,” try saying “I would love it if you do this for your mommy.”

It is always a good idea to keep in touch with your child’s needs and emotions to understand what’s concerning him and inclining him to throw tantrums. This one may be different in case of every child. Most children tend to get cranky when they’re hungry, while others may be sleepy or just plain bored. While it may not be possible for you to tend to every need, you can always try intervening and making appropriate changes to help him calm down.

Getting down to your child’s level is important at this stage. Many researchers believe that individuals who establish eye contact with others tend to have a much stronger impact on them, and that’s exactly what you would want to do for your little kid. Quit your habit of screaming orders or yelling from two rooms away to get your child to notice you! Instead, stoop to his height, look at him in his eyes and speak in a firm, clear tone, taking care not to be too easy or strict.

If you find your child behaving in an inappropriate manner, don’t ask her to stop behaving so immediately- it will in fact tempt her to do it again and again! Give her the time to transition into any other activity. Another great idea is to give her a five minute warning time (be gentle here) to stop crying or making a scene. Be calm and patient – all kids want is a lot of attention, and your child automatically stop throwing tantrums once you stop paying attention.

For kids who throw tantrums over their lack of power, this one can be a good way to deal. Give your child a choice instead of lecturing him about why he shouldn’t be behaving that way. Instead of asking him to go to bed, give him a choice; ask him “Would you like to brush first or put up your pajamas?” Allow him to make small decisions for himself. Let him take his pick when out shopping for clothes and toys. This will make him happy that he does have some power after all!

A lot of children may throw tantrums when it comes to performing activities involved in daily routine like taking a bath or brushing the teeth. A good way to help your child stay away from behaving inappropriately during that time is to make daily routine activities enjoyable. Get him some bath toys and funky soaps to help him enjoy his bathing experience. Look up some good games on the internet to make routine work feel like playtime. Another great idea is to educate your kid on the importance of these routine activities. Explain him how bathing keeps the body clean and fresh, and brushing will help keep his teeth white and shiny.

There’s absolutely no replacement for this one! Believe it or not, acting as a good role model for your kid is one of the best foolproof ways to ensure that your kid behaves in the right way, sooner or later. There may be certain situations which may leave you stressed and may tempt you to get angry, yell and display negative emotions. Stay calm in such situations. The first teacher any child has is his mom and dad, so it is vital you are in your best behavior, at least in front of his! Remember that your kid is observing everything that you do, and if he sees you being a fair and responsible person whatever the situation may be, chances are he’ll become that way too.

8. Stay Away From Triggers:

Try to avoid potential tantrum triggers. Every child has one; you just need to observe carefully. For younger children, food and sleep are the most common triggers, so make sure your child is well fed and has had a good night’s sleep. For children who are older, there’s a quick approach; just say, “I understand you had a fight at school, but don’t be hard on yourself, everything will be sorted out soon.” You can also suggest alternative outlets to your child, to control his temper. For example, if your child demands something you don’t want to get him, just ask him to play with another toy or get him busy in some other activity.

There are times when your kid may be very irritating and difficult to control, no matter what. Try not to lose control during that time, as that is what will compel the kid into doing it even more. Remember, anxiety is contagious, so stay calm during this period. Avoid giving in to your child’s request easily; especially if it’s something that he shouldn’t really be asking for. Establish control, but in the right way, using the right approach. Let him know that you are in charge, but you value his opinion too. Remember, this is the time you’ll be shaping your child’s behavior for the future, so make sure you be moderately firm with him.

Instead of breaking down yourself and thinking ‘I can’t take this any more,’ be courageous towards your approach in raising your kid. Also, when your child is in the middle of a tantrum, you can be sympathetic towards him and say “I understand you want that dear, but we’ll try and get it next time….okay, darling?” Calling your kid by his pet name, the one you have especially for him, also leaves a stronger impact on him. Basically, your child should understand that you do value his emotions, but you’ll be the one making decisions.

11. Having the Right Approach:

Having the correct approach is extremely essential when it comes to dealing with a fussy kid. Make sure you are in the positive frame of mind. How well you manage to keep your child’s temper tantrums in control depends upon:

Remember that your kid is just a child; you can’t expect her to behave as mature as an adult all the time! Also, all kids throw tantrums, so don’t treat your kid as damaged goods that need to be fixed.

It is always a good idea to analyze yourself as a parent. Are you lacking out somewhere? Does your immense workload leave out no time for your kid? That probably explains why your kid breaks down ever few hours and tries to get your attention. Remember, your child is your responsibility and you need to make time for him, build a strong and friendly connection to him to get him to obey you. As a parent, you will need to be an anchor in the storm; if you stay calm, things will automatically calm down.

Parenting is indeed no walk in the park! And it is your job to make it easier for you and do it right. Get all the support you need from friends and relatives and most importantly your spouse. You can also try and split the household work with your partner if you’re a working mom. This way, you will be able to give all the care and attention to your child that he truly deserves.

The worst thing is when your kid throws a tantrum in public view. It’s just plain embarrassing and also angering! Instead of handling your kid in an inappropriate way at this time, try to stay calm and do what an effective parent would do.

When your kid throws a temper tantrum in public, the best way to handle the situation is to try and distract him. If that still doesn’t help, get into your car or take him back home, and it’s now time to take some appropriate measures to make sure it doesn’t happen again.

Before The Next Tantrum:

Occasional temper tantrums may be acceptable, but if you find your kid crying or demanding things every few days, you will need to sort things out. Before your child throws another tantrum, here’s what you need to know.

What Do You Do When Your Child Throw Tantrums?

Using logic or giving instructions when your kid is throwing a tantrum will not yield much benefit! You cannot deal with the “emotional tsunami” of your kid by simply asking him to “stop crying” or “calm down”. If you are expecting your kid to behave rationally when he is actually driven by his irrational right side of brain, you need to think twice. Here are some more suggestions on how to handle with kids tantrums:

If problems persist, do not hesitate to consider counseling. Professional counsellors may bridge the gap between you and your child and improve all channels of communication. Such an expert is the right person to determine the root cause of loss of self-esteem, anger, depression and aggression in your child before it is too late.

Hope you liked our post on kids temper tantrums will be helpful. Moms, share with us if you have any other tips on how to deal with child tantrums and disappointments in your child in the comment section below.