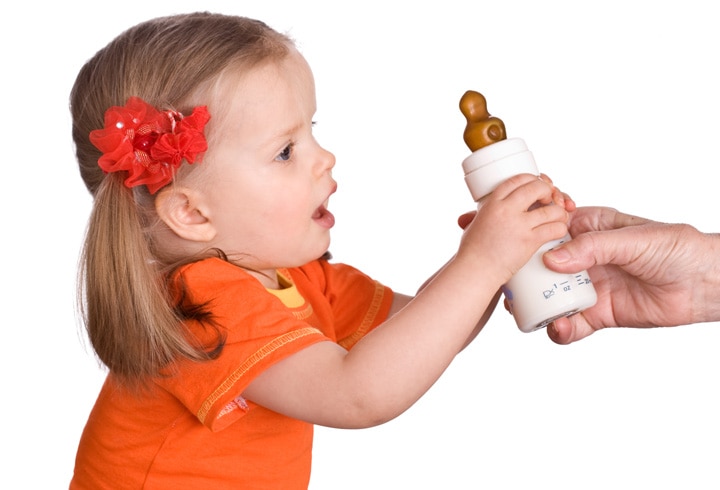 With each passing day, as your baby grows, you will need to implement changes to every aspect of his life from food to his clothing and other requirements. Many toddlers become very attached to their bottles as they tend to view it as a source of nourishment and also comfort and security.

However, if it’s time to introduce solid foods to your baby’s diet, you will now need to make changes to start weaning your baby from the bottle. Regardless of what reason your baby is attached to the bottle, it should be done at the right time, using the right tactic. In this article, we’ve explained all the basic aspects of how and when to stop bottle feeding for your little one.

When To Stop Bottle Feeding Toddler?

Around the end of the first year, you can start to try stop bottle feeding your toddler and check if he’s comfortable drinking milk from a small cup. While this transition tends to be easy and natural for some toddlers, who quickly start drinking from a cup, some parents may find it difficult to break the bottle habit.

Generally, after 10-12 months of age, the baby is able to hold the head up and drink from a cup. This is something younger babies can’t do, so it is not recommended to try this if your baby is under a year old. A lot of babies tend to become accustomed to the bottle because the bottle’s nipple mimics the feel of their mother’s nipple.

Why To Stop Bottle Feeding?

Apart from the obvious reason that you would want your toddler to leave his baby bottle now that he’s grown up, there are many other reasons why you should consider stopping bottle feeding in your toddler:

1. Obesity Risk: While both breast milk and formula milk are rich in nutrients, continuing to drink from the bottle can pose health risks for your baby, particularly raising the risk of obesity in later life.
2. Dental Problems: According to American Dental Association, sucking on the baby bottle, particularly during sleeping, is believed to contribute to tooth decay. Breast milk and formula milk contain certain sugars, which can coat your baby’s teeth and contribute to decay in the early age itself.

How To Stop Bottle Feeding Habit For Toddlers?

The transition from bottle to cup requires the willingness of your child to consume milk from a cup and eat more calories. It also calls for an emotional acceptance of a replacement to bottlefeeding as it gives them the comfort similar to breastfeeding.

1. Get The Timing Right:

Doctors usually suggest the introduction of cup milk when your baby is six months old. Most of what the children take might end up on the floor, but it is good they are introduced initially. When they reach 12 months, their skills to handle a cup improve and they can take liquids with ease.

When your kid is one year old, it is the time of transition from formula to milk, and a perfect opportunity to move to a cup.

Let your kids learn how to use a sippy cup by mimicking you. Let it be fun initially where you give him different liquids in the cup, and when he takes it right, reward him with milk. You can also try using a funny straw so that they will enjoy it more when sipping from a cup.

Also, take care that you don’t always offer him juice in a cup and milk in a bottle. That way he would refuse to take milk from a cup later.

Kids have a liking for a particular character or would have a few interests. Let them pick cups of their choice or give them a cup which has their favorite character on it. Spill-proof cups can be used to ease the transition.

When you serve milk to your baby, ensure that you slowly dilute it when served in a bottle and at the same time offer milk from a cup. This way they find milk in a cup tastier than that in a bottle.

Rather than changing from a bottle to a cup overnight make sure the transition is over a period.

Introduce cup initially during the day as a part of their meal. Each day, reduce the use of the bottle at a particular time of the day. Start with a midday feeding and then in the mornings and finally in the night.

Most parents find it difficult to phase out from the night usage as it is usually associated with their sleeping habits. So ensure your baby is ready to phase out by deviating him to something interesting, like giving him a warm bath, rocking him while reading a story and snuggling with a lovey.

When you are trying to wean your child, keep away all the bottles from your child’s reach and take them out only if needed. If your kid is asking for a bottle, offer him in a cup. He may be upset initially, but have some snacks or other foods ready so that they cause a distraction. If you give into his requests, it will be difficult as he grows up.

Also known as sippy cups, they have spouts that are specifically designed for babies. Introducing to these cups will ease the transition.

When your child starts using a cup, give him positive reinforcement and praise him. For instance, if anyone is around, say like, “See, Andy is such a big boy he drinks milk in a cup.”

9. Know What Your Child Requires:

If he asks for a bottle, try to understand what he requires. If your baby seems hungry, offer nourishment in a cup or a plate. If it is comforting him, hug him and if it appears boring your child, sit down and play with him.

These simple tips will surely help you get your toddler off his bottle feeding habits eventually. You could also take suggestions from a pediatrician or a doctor to understand your choices and how you can help your toddler start getting accustomed even without the bottle.